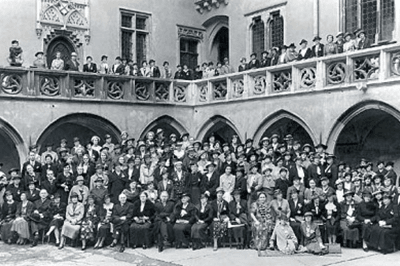 Over 100 Years of Achievement

When Dean Virginia Gildersleeve, Professor Caroline Spurgeon and Rose Sidgewick sat together in 1918 and conceived the idea of a worldwide organisation uniting university women, they were convinced that by fostering friendship and understanding, women graduates could help prevent another catastrophe such as the World War that had just ended. Their dream became reality the next year when university women from Great Britain, Canada and the United States met to lay the foundation for IFUW. Over ninety years later, and under the new title of Graduate Women International (GWI), thousands of women graduates throughout the world share the same principles and vision that inspired those early leaders. GWI continues to advocate in favour of secondary, higher and continuing education for women all over the world.

The lamp logo was designed by members of the Norwegian Federation for the Third Conference in Oslo in 1924. The delegates at that meeting adopted it as the permanent badge of IFUW. The original showed an antique lamp representing the light of learning on a blue background broken with the letters of IFUW. Around the central disc was an interlinked chain symbolising the bonds of friendship linking IFUW members throughout the world. Eventually the lamp came to be known as the lamp of friendship. It was later modernised and the chain was dropped.

GWI pays tribute to VGIF for 50 years of continued support.   We invite you to click on the photo below to access comprehensive details of this wonderful relationship. 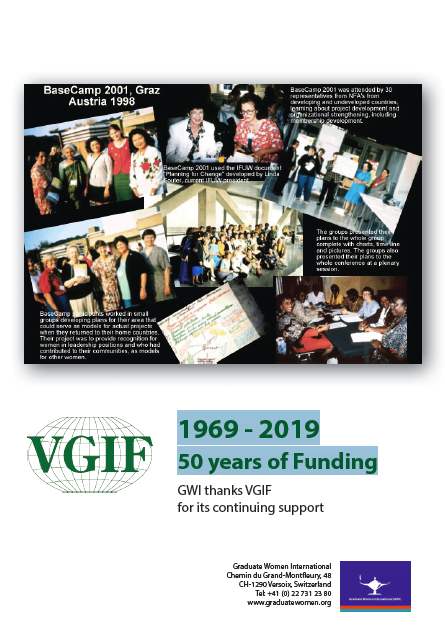 All GWI archives from 1919-1997 are stored at the Aletta Institute for Women’s History. Anyone wishing to access GWI’s archives should contact the Institute directly:

Back to Our Story