Home » The Cause » Peace & Stability 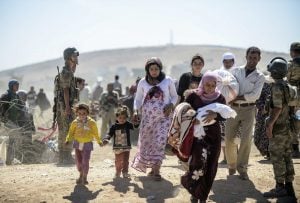 All research has shown that investment in gender equality and the empowerment of women, including educational and training opportunities, are integral to maintaining stability and peace.

Worldwide displacement is at the highest level ever recorded. There were 31.1 million new internal displacements by conflict, violence and disasters in 2016. This is the equivalent of one person forced to flee every second. (Internal Displacement Monitoring Centre)

The number of people in need of international humanitarian assistance has tripled over the last decade, with 80% of them affected by armed conflict. Multiple surveys conducted in conflict-affected areas showed that women tended to be less informed and reported lower levels of access to both formal and traditional justice mechanisms than men. Further, women and girls who are refugees, migrants or internally displaced peoples often face different vulnerabilities and challenges than men in the same situation, in particular the risk of violence, rape, early and forced marriage, prostitution and reproductive health needs.

For both genders, access to education is usually limited or completely interrupted. Often, and especially where there is conflict, it is dangerous for displaced girls and women to travel to schools. Schools that are available for use in areas of refuge often lack the supplies, resources, or space to cater for an influx of displaced students. Schools can provide a safe space to work through and reduce trauma.

Despite these challenges, education offers an important avenue for the empowerment of displaced persons. It is the primary way in which such persons can learn about their political, legal and social rights in a new country, as well as improve their agency and position through cultivating their language skills and knowledge of their new culture. Education allows displaced persons to increase their employability and ability to rebuild and lead community development once conflict has subsided. Education allows girls to integrate into schools and further their education in their new country.

Empowering women in the peace process

Including women in the peace negotiations in a meaningful way increases the chances of agreements being reached, produces greater implementation and positively impacts the durability of peace. Despite the significant value that stands to be gained from the inclusion of women in peace negotiations, women are often excluded from such negotiations. The empowerment of women and girls through education fosters increased awareness of international humanitarian crises, and allows women positively to impact peace and stability.