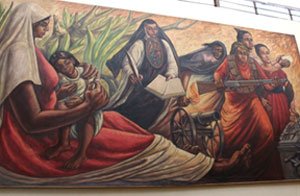 Family violence, school bullying and sexual harassment continue to be a social problem in Mexico. Two out of three families suffer some form of violence. In Mexico City, seven out of ten women are victims of violence. There is still discrimination in many forms in a relatively high proportion of family and social environments, for example: lower wages for women with the same qualifications as their male counterparts in some private businesses, lack of equal rights for boys and girls in the family environment, difficulties for women trying to reach top executive positions.

The Mexican Federation of University Women (FEMU) is organizing workshops at the new Women’s Museum – “El Museo de la Mujer” which opened in March 2011. Held once a month, the workshops will promote gender equality and women’s human rights, especially focusing on freedom from violence, and women and girl’s education. Each month’s topic will be displayed at the Museum and through the Internet on the Museum´s web page, Twitter and Facebook to reach young people.

A Documentation Centre is being established in the Museum and will provide a space for both academics and the general public to research specialized information about women’s history, human rights and feminism. The Museum of Women is only the second of its kind in all of Latin America.