Keeping Girls in School One Pad at a Time 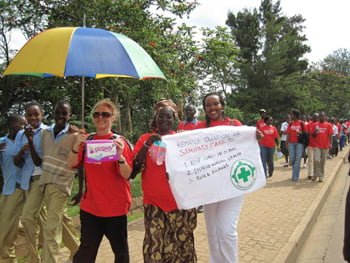 Members of the Rwanda Association of University Women (RAUW) formed a partnership with Sustainable Health Enterprises (SHE) to improve communication and education on feminine hygiene issues.  Studies show that failure to address the menstrual needs of girls and women has a negative financial impact in developing economies with girls and women missing a significant number of days at school/work per year.  RAUW and SHE  worked directly with women and girls from different economic and social backgrounds to develop culturally appropriate key educational messages.

The campaign “kicked off” on March 26, 2010 with a national march which brought together policy makers, schools, universities, students, parents and international organisations.  The march was officially started by the Permanent Secretary to the Ministry of Education, Sharon Haba.  Hundreds participated, wearing red t-shirts to further emphasize the need to talk openly about the issues surrounding menstruation.  The route was organised so that it went by the Parliament and government buildings and a number of business centers.  It ended at a stadium where the issue was debated by the general public in front of the Guest of 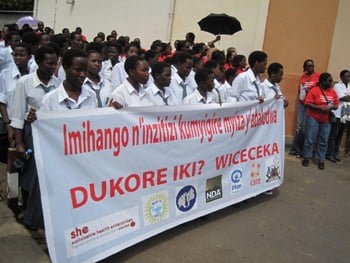 The months following the national march have concentrated on producing and launching more materials for distribution to national and international stakeholders, schools and work places, and on evaluating the effectiveness of the campaign.