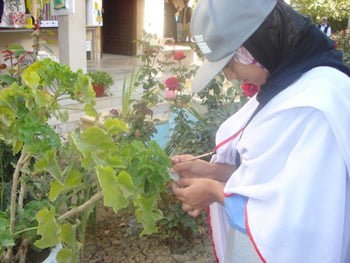 The global economic recession and increasing militant activity in the North West Frontier region of Pakistan has impacted the economy of the country very badly.  A number of girls’ schools and colleges have been destroyed and budgetary allocations for education and health care have been reduced.  Against this background, the Pakistan Federation of University Women (PFUW) continues to promote quality education for girls and women of all ages.

In 2009 it expanded activities for young women at the Skill Development Centre by employing another part-time trainer and by introducing new courses in fabric painting, dressmaking and pot painting.  Another teacher was found for the English-speaking classes, meaning that a further 50 students could attend and benefit from this project.

During the 2009/2010 winter vacation, PFUW ran a very successful workshop on environmental degradation,

environmental protection and radioactivity to generate interest of school girls in science subjects, particularly in physics, chemistry and botany.  The workshops took place at three schools in the suburbs of Karachi and approximately 100 girls were involved.  PFUW hope to organise similar activities on a more regular basis from June 2010 onwards.  Political instability (particularly in January and February 2010) hampered some of the planned activities.