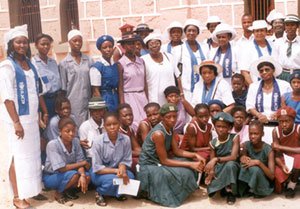 This is a country where many girls do not go to school at all, or are taken out prematurely because of the cost of their education. This situation has been compounded by the devastating civil war, which raged in Sierra Leone for more than 7 years.

During this period of violence and unrest, many families lost their livelihoods, children were orphaned, schools were destroyed and teachers were killed or displaced. For the last five years, the Sierra Leone Association of University Women has been providing a “Scholarship Programme” for girls in Freetown, who cannot afford the cost of their education. Sponsorship from SLAUW covers one or more of the following: tuition, books and study materials, uniforms, examinations, lodging and transport.

Up to 80 scholarships per year have been given to students in primary, secondary and tertiary education. Students with special needs are also included in the program and a blind awardee successfully completed her college education during the year.

In 2007, 63 scholarships were awarded – 53 to secondary school pupils. 5 to primary school pupils and 5 to college and tertiary level students. The majority of these students live in the Western area, which comprises the capital Freetown, several coastal villages and several mountain villages.