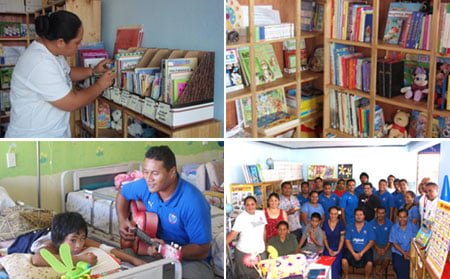 This project is a leader in its field as many hospitals in the Pacific region do not have educational resources for children. Launched in August 2008 at the National Hospital of Samoa, the Children’s Library provides a bright and comfortable library and classroom area for young patients up to the age of twelve, to enable them to continue their education during short and long-term hospitalization. The library contains books, games, audio material, posters and also has play area and playground.

Computers desks, chairs ,books and computers have all been funded with the help of the New Zealand High Commission, the Australia High Commission, the European Union, Canada Fund, Digicel and Yazaki Ltd. A television and DVD machine has been provided by Samoa Breweries.

During 2008 almost 300 children between the ages of 6 months and 12 years benefited from the library, along with their mothers and fathers, carers and nurses. Children come into the area from the hospital wards to read, write, play educational games, use the toys, listen to stories, watch movies and DVDs. Parents can accompany them and can also read magazines, local newspapers.

International Literacy Day in 2008 (September 7th) was celebrated in the pediatric ward of the hospital, with the help of members of the Samoa Rugby team (Manu Samoa), who read to the children and played word games with them.

At the end of 2008, SAWG was able to emply a full-time librarian to be in charge of the library. SAWG members come in and read to the children and help out with activities.