Home » Advocacy » Violence against women, a bleeding wound in the Syrian conflict – HRC 25

Violence against women, a bleeding wound in the Syrian conflict – HRC 25 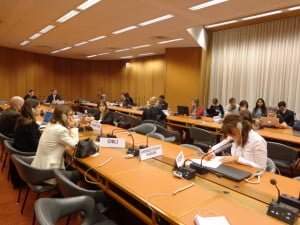 On March 17th, 2014, the Permanent Missions of Belgium, Denmark, Netherlands and Sweden organised a side session called “Violence against women, a bleeding wound in the Syrian conflict” at the Human Rights Council in Palais des Nations in Geneva.

Mathieu Routier, Programme Officer at the Euro-Mediterranean Human Rights Network, explained that during the ongoing Syrian conflict, women have played a large role in protests, acted as citizen journalists and delivered humanitarian aid during military operations. However, women have also devastatingly been subjected to sexual violence and rape, especially at checkpoints, during military incursions and in detention facilities. Sema Nasar, a Syrian human rights and women’s activist, reiterated that all backgrounds, regardless of faith or profession, are targeted and are vulnerable to arrest or sexual exploitation.

Nasar explained that 25 per cent of detainees are linked to the revolutionary movement in Syria; the rest are often abducted and held as hostages to pressure others to surrender. Women are used as weapons of warfare, to punish and for vengeance against the revolutionaries. The detention facilities are held under the control of the government and women are held there without trial, face solitary confinement, and are coerced into giving public confessions. Nasar added that facilities are overcrowded and the ones with special needs, such as the pregnant and the elderly, are not given special consideration.

Routier said there is widespread belief among the community that whoever is detained has at some point been exposed to sexual violence. Since there is a social stigma attached to sexual violence, victims often face rejection and often refuse to go back or even to report their crimes. GWI promotes all forms of education for women and informing them of their legal rights can help women’s recovery process, as well as help identify perpetrators.

The speakers offered recommendations on how to combat sexual violence against women in Syria. Amir Kazkaz, from the Violation Documentation Centre in Syria, explained that medical and psychological centres are necessary for the victims, but the cultural mindsets need to be considered before planning them. For instance, victims may be hesitant to seek rehabilitation if the centre is named explicitly for victims of sexual violence or rape; so making sure they are approachable and accessible to everyone is important. In addition, Routier discussed needing to establish trust with the victim to better understand how the practice is destroying women.

Nasar believes the government needs to put an end to the exploitation of women and perpetrators need to be punished for their crimes to end the high levels of impunity. The international community defending women, such as the GWI, can urge governments to take action to protect women from sexual violence, which is a violation of their basic human rights. Kazkaz added that military commanders should be held accountable because even if they did not give direct orders, they did not try to prevent the violations from occurring either.