The Universal Periodic Review for Newcomers 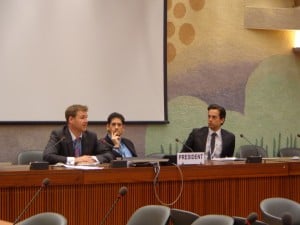 On March 19th, 2014, the NGO Committee on Human Rights hosted the side session, “The Universal Periodic Review for Newcomers” in correlation with the 25th Human Rights Council at the Palais des Nations in Geneva.

The speakers discussed the process of the Universal Periodic Review (UPR), its importance in the international community, how states would like to be lobbied and how NGOs can play active roles in the procedure. The UPR is a peer review system that was set up by the UN to examine the human rights practices of all Member States once every four and a half years. Three reports are presented to the other Member States during the review: 1) The State under Review’s national report 2) a compilation of information the UN has on that State 3) a summary of NGO and other stakeholder findings. After the State under Review presents its national report, other Member States can pose questions, make comments and offer recommendations to improve the human rights conditions in the country. The State under Review has the option of accepting or refusing the recommendations, but has to commit to implementing any recommendations that it does accept.

Roland Chauville, Representative of UPR Info, explained that the UPR is a crucial component of achieving human rights because it creates a space for discussion between different actors at the international level. Governments are able to consult with civil society when preparing reports and have an open dialogue with other states. UPR also remains apolitical, which creates more legitimacy for the Human Rights Council (OHCHR) and offers a better chance for implementation of the recommendations.

The speakers also discussed which types of countries were more or less likely to utilise the UPR system. Western countries are less likely to accept the recommendations because there is a higher threshold for implementation in these states. Developing countries hope to demonstrate their political will in engaging in human rights improvements, so they are more willing to accept recommendations. However, limits on their resources may prohibit them from progressing in all anticipated areas. States in a transition process also accept recommendations because they are seeking the best practice methods. The closed countries may see some implementation, but UPR is not as effective in curtailing human rights violations in these states.

Although NGOs cannot take the floor during the review, they can still play a key role in the process to ensure the human rights issues they are concerned about are discussed by states. They can contribute through offering information to the State under Review during its national consultations held six months to a year before the review. In addition, NGOs can prepare written submissions a few months earlier to be sent to the Member States they feel will most be interested in their human rights issue. The OHCHR also accepts written submissions by the NGOs and other stakeholders, which it compiles as the third report of the review. The paper should summarise the important issues, pose questions and offer simplified recommendations to the State under Review. GWI and NFAs can write advocacy papers to urge governments to provide quality, accessible and safe education to girls and women at all levels. The NFAs can then contact the embassies of Member States that prioritize women’s education and persuade them to offer recommendations to the State under Review. Since there are many recommendations that states and the UN receive from NGOs, civil society can make the most impact if they hold common briefings and write joint submissions prioritising the main issues. Partnering with other organisations that value the rights of women and children can help the NFAs raise awareness and reach a larger audience.