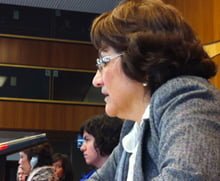 Dr Gloria Ramirez, member of the Mexican Federation (FEMU), was in Geneva on 24 October to present information to the Pre-Session Working Group of the Committee on the Elimination or Discrimination Against Women (CEDAW) on behalf of FEMU and 23 other women’s organizations. In her presentation, she noted that violence against women is a major and growing problem in nearly all parts of Mexico. She cited the 1000 cases of femicide that have occurred over the last six years and the increasing disappearances, particularly of younger women, as well as threats made to human rights activists working on these issues. She also spoke about the problem of the criminalization of abortion and gave the example of one young woman sentenced to 23 years in jail for a spontaneous abortion or miscarriage.

While Mexico has signed nearly all of the international mechanisms protecting human rights, the problem is that compliance is partial at best and in no way is systematic or consistent enough to meet the commitments. Very little effort is made to circulate information on the CEDAW Recommendations and many state and local officials are not even aware that these exist. There is no gender perspective within governmental departments and the lack of an effective coordinating body and the absence of monitoring and data collection are major barriers. FEMU and its partners have suggested a range of questions that should be posed to the Government, among them why a federal law on femicide has not yet been passed, what measures are being taking to distinguish cases of femicide from drug trafficking-related homicides, why women continue to face discrimination under Mexican law especially in the criminalization of abortion, and what mechanisms and tools exist for dealing with violence against women and girls in primary, secondary and higher education.

The full review of the Mexican national report will take place at the 52nd CEDAW Session in July 2012. FEMU and their partner organizations are now working to complete a shadow report and will attend the July 2012 CEDAW session in New York to give further input.