Making Children’s Access to Justice a Reality: the Third Optional Protocol to the UN CRC 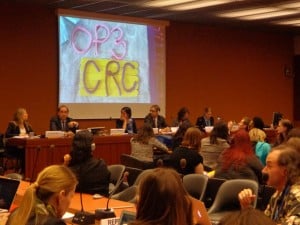 On 13 March 2014, the Permanent Missions of Albania, Bolivia, Costa Rica, Germany, Montenegro, Portugal, Slovakia, Spain, Thailand and the International Coalition for the Optional Protocol to the Convention on the Rights of the Child (OPCRC) hosted a side event at the 25th Human Rights Council. The session, called “Making Children’s Access to Justice a Reality: the Third Optional Protocol to the UN CRC” was held at Palais des Nations in Geneva.

Member states and non-profit organisations gathered to promote the ratification of the new treaty, the Optional Protocol to the Convention on the Rights of the Child on a Communications Procedure, or the OP3 CRC. The speakers hoped for states to ratify the treaty to address violations children face in every country, such as violence, exploitation and discrimination. Ratifying it would allow children to submit complaints to the UN if the violation of their rights cannot be addressed in their country, or if the suggested domestic remedies are ineffective. The UN Committee on the Rights of the Child can then make recommendations to the country on how to protect the rights in the future, and countries have to commit to following the given advice. Since the Operational Protocol only applies to states that have ratified it, it is crucial to make sure all states accept it to guarantee the safety of children.

The treaty would allow children to speak up against their violations and turn to the international community for assistance. Renate Winter, Member of the Committee on the Rights of the Child, explained that some states refuse to ratify because they do not want the international community to know about the injustices occurring there. Other states believe they are already progressive and have functioning human rights in their countries, so are hesitant to potentially receive recommendations from the UN.

There are various ways to promote the ratification of the treaty and take a step in furthering children’s human rights. Disseminating information about the OP3 CRC to the general public and also children can help raise awareness and pressure politicians to pass legislation swiftly. GWI supports spreading information on important issues through advocacy campaigns and encourages its members to pressure governments to pass effective policies.

Better forms of communication are necessary in order to teach children their rights. For example, Winter told the story of a 12-year-old boy in an orphanage who was forbidden to read the letters sent from his widowed mother and was not allowed to receive visitors because the director disliked him. The boy’s right to privacy was being violated but the boy could not take action because he did not know what rights he had. GWI advocates for human righs education for all people so that they are empowered and lead better lives. Organisations can assist in creating and distributing child-friendly brochures explaining to children what rights they possess and how the ratification of the treaty can help them.

Improvements in the legal procedures can also protect children. Winter explained that many states do not have legal jurisdiction to report cases of violations. Without these reporting mechanisms, the vicious cycle will continue and children will lack any recourse to justice.

Antje Weber, Representative of Kindernothilfe, expressed that development is only possible if there is joint action between civil society and states. Workshops and regional conferences in the past have proved successful in bringing these groups together to work towards achieving a common goal. NGOs can also assist by submitting information to the Committee to help identify gaps in protection. NFA members can identify the human rights violations occurring in their respective countries and contribute to the global effort.