Home » Advocacy » IFUW Report from the Afghan Conference in Bonn

IFUW Report from the Afghan Conference in Bonn

IFUW Report from the Afghan Conference in Bonn 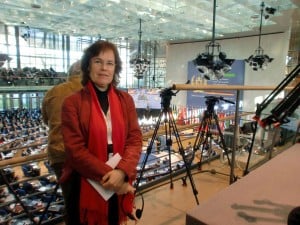 On 5 December international leaders met in Bonn Germany to discuss the future of Afghanistan. IFUW national federations and associations in countries around the world contacted their Ministries of Foreign Affairs and other government leaders to bring pressure on national governments to ensure that Afghan women would be adequately represented. Heike Mensch of the German Federation, who is a media specialist, was able to obtain press accreditation to the meeting. She sent the following first-hand account:

I arrived at the hotel where the press center was established and bumped into the half the delegates of the Afghan Women’s Network. I met their European Media Contact Jennifer Rowel. One of their press releases available can be found at www.graduatewomen.org/docs/2011_bonn_awn.pdf. They were very careful in their formulations – they didn’t refer to CEDAW and 1325; they only circled around it. Other women referred to UN Resolutions as necessary and binding for Afghanistan.

A very interesting event was organized by the German Ministry for Economic Development (BMZ) “Women’s Rights and Peace for Afghanistan – a Process in the Hands of the Afghan People” with representatives of Afghan NGOs, followed by an exchange with the delegates of the Afghan civil society. The group arrived more than an hour late because UN Secretary General Ban Kim Moon had unexpectedly asked them to meet him for one hour. They said the meeting had been very good but gave no details.

Most of the Afghan speakers were very good; all were very eloquent. Here I heard the woman speaker of the NGO group, Selay Ghaffar for the first time and was highly impressed: She speaks her mind very clearly, has strong demands and statements. She is certainly somebody to watch and support. Her topics: much too little empowerment of women, bad handling of women at court, major threats for women’s rights.

The guiding theme of the evening was the lack of rule of law, violence by security forces (specially to women), not enough participation of women in all areas, the current highest corruption ever in Afghanistan, no access to schools for girls and women, danger of negotiating with “those who violate human rights”, the danger posed by terrorists trained in neighbouring countries and the necessity to involve civil society in high-level planning and decision making, lack of health facilities and treatment – 2nd highest maternal mortality in world, discrimination of women in laws.

At the end there was a strong call for “women of the world to stay with us in our struggle”.

There wasn’t much chance for exchange with the delegates of the Afghan civil society, as they left soon after the official part.

Monday: I stayed on the Press Gallery for several hours and had several useful exchanges.

Opening of Conference by

1. German Min. Foreign Affairs Dr. Westerwelle: He didn’t mention women at all, ending with a wish of hope for children.

2. President Karsai: only mentioned some statistics – percentage of women now in public sector, education, central government – never near 50 %. He spoke of being on a good path.

3. Secretary General Ban Kim Moon: He was the only opening speaker to explicitly and extendedly demand “more women in positions of power”, “more women in political participation in all areas”, “guarantee of women’s rights”, “more education for boys and girls”, “women are ½ the population … must be fully empowered”, Afghanistan must apply international standards”.

4. German Chancellor Merkel: mentioned women only once in context: All parts of society, including women and children, must be respected.

I talked to several members of the Afghanistan NGOs that travelled over for the Civil Society Forum. Most interesting was Najiba Ayubi, the Media Director of the Killid Group, the biggest NGO funded group of radio stations in Afghanistan – now eight stations. It has a women’s magazine produced only by women. 40% of her employees are women. We spoke for a long time and exchanged many ideas and experience – she is a very enlightened, free thinking journalist and feminist and strong fighter for the cause of women. She is very interested in contacts with IFUW and would like to help us find good contacts to university women.

While talking to Najiba the women of the Civil Society Forum received a note from Hilary Clinton. She asked only the women to meeting with her. I tried to speak with Najiba after this, but she was in constant talks with politicians. Will try to get in touch with her by mail to find out more.

I got some more addresses of Women NGOs and several Afghanistan representatives promised to send me some more contacts. Here again, all were very interested in finding out more about us.

Conclusion of Conference. The text of Afghanistan Government can be found at www.graduatewomen.org/docs/2011_bonn_conclusions.pdf. There are several important remarks about the inclusion of women on all levels and about human rights and fundamental freedom – where women are mentioned explicitly.

I had some very good conversations on the side with Afghan expatriates and with journalists from the region. They are all very concerned, that the insurgents (Taliban) will gain more power. They called for sanctions against the enemies of Afghanistan – “some neighbours”. Many said “we know who our enemies are”. They all spoke of the great need of education in all parts of the country, specially the rural areas. All expressed their hope, that Afghanistan will never again be left alone by the international community.