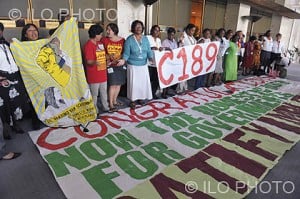 During the 100th session of the International Labour Conference in June 2011, gender was a major part of the discussion on Decent Work, this year’s theme. In the committees on Social Protection, Application of Standards, and Labour Administration, the importance of protecting vulnerable groups, including women, was stressed. Many delegates in the committees on Social Protection and Labour Administration brought up the empowerment of women through education and skills training as a solution. Most important was the passage of a new International Convention 189 on the Rights of Domestic Workers and the accompanying Recommendation on Decent Work for Domestic Workers.

Recognizing that domestic workers are consistently undervalued and remain the most marginalized workers in most societies, the Convention lays out their rights to fair wages, decent working conditions and hours, appropriate living conditions, equal treatment, fair access to legal and medical services, and finally, the right for domestic workers not to face abuse or discrimination. While domestic workers everywhere face injustice, it is women who suffer the most.

Many of the gender-related Articles throughout the Convention for Domestic Workers address general practices of abuse and discrimination in the workplace, all of which apply to both men and women. Article 3 calls for the elimination of discrimination of employment and occupation in the workplace; Article 5 prohibits abuse, harassment, and violence within the work place; and Article 10 insists on equal treatment of all employees.

The Convention does include two articles specifically aimed at women and discriminatory practices specific to their sex. Article 11 states that remuneration must be made without discrimination based on sex and Provision 3(c) of the Recommendation states that no employer can force a domestic worker to undertake HIV or pregnancy testing or disclose their status.

The Convention and Recommendation also emphasize that domestic workers have a right to education and that it is the responsibility of both member states and employers to ensure that this right is respected. Accordingly, Provision 26(3) calls on member states to pursue universal education for all workers. More specific to domestic workers, Article 4 (2) states that each member must ensure that domestic workers under the age of 18 are not being deprived of their right to compulsory education, and that their work does not interfere with their ability to participate in further educational or vocational training. Furthermore, under Provision 25 (1f), employers should encourage the development of domestic workers’ competencies, including literacy training, so that workers may enhance their professional development and employment opportunities. Overall, the Convention Concerning Decent Work for Domestic Workers put forth a comprehensive document intended to address the often-neglected plight of domestic workers. This was a big step forward for women, as women make up a large majority of domestic workers. GWI welcomes this as one of the civil society organizations having lobbied for its passage for many years.