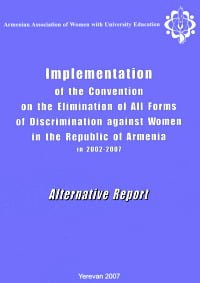 March 2009 – The Armenian Association of Women with University Education (AAUWE) co-authored an alternative report to the 43rd Session of the Committee on the Elimination of Discrimination Against Women (CEDAW) assessing the discrimination Armenian women and girls face in areas such as education, employment and health.

For example, the report highlighted the continuing under representation of women in political decision making. There is only one woman minister; only two women deputy ministers out of 65; only one woman regional governor out of 10, only one deputy governor out of 17 and women hold only 8.3% of the top-level positions in local and regional administrations. The AAUWE report provides a critical analysis and recommendations for action needed to remedy the current problems.

In each of the CEDAW sessions, official reports from six to twelve countries are reviewed. Alternative reports from civil society partners or coalitions are welcome and are used in evaluating progress Governments are making toward meeting their obligations under the Convention on the Elimination of All Forms of Discrimination Against Women. GWI’s Working Group on the Girl Child and the Working Group on Education Advocacy are currently preparing material that will assist other national federations and associations (NFAs) that would like to take part in this process. At 44th Session in New York in June 2009, Argentina, Denmark, Japan, Spain and Switzerland are the countries reporting where GWI has NFAs. In Geneva in January 2010, Egypt, the Netherlands and Panama will report. GWI is pleased to accredit one or two representatives to these meetings from NFAs whose countries are reporting, but no funding is available to help with travel or living expenses.