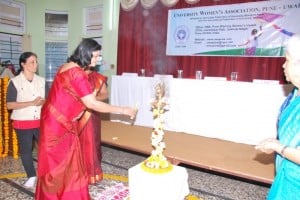 Lighting of the Traditional Lamp by UWAP President

A woman is the full circle. Within her is the power to create, nurture and transform ~ Diane Mariechild

Saturday, 8 March 2014 marked the celebration of the 105th International Women’s Day (IWD) across the world. It is a day to annually celebrate the respect, appreciation and love towards women and was originally called “International Working Women’s Day”.

As you may be aware, in different regions the focus of the celebrations ranges from a general celebration of respect, appreciation and love towards women to a celebration for women’s economic, political and social achievements.

The University Women’s Association, Pune – UWAP also celebrated this occasion on the evening of 8 March 2014 with much pomp and enthusiasm. It congratulated and honoured some of the brave women achievers who were instrumental in bringing about change in society, performing acts of sportsmanship and spreading awareness through simplicity, dedication and innovation. 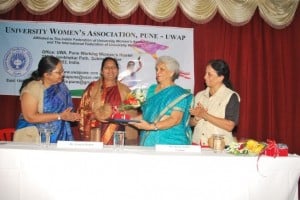 It was a pleasant evening and the programme commenced by lighting of the lamp or the Diya by the Trustees Dr Mawar, Ms. Malati Kelkar, President Ms. Veena Bathe and our guests for the evening Ms Vasanti Joshi and Ms Pramila Bhalke.

President Veena Bathe introduced women achievers Ms Vasanti Joshi and Ms Pramila Bhalke. She informed the members that as the 2014 International Women’s Day theme was ‘INSPIRING CHANGE’, UWA, Pune will honour two women who, through their courage, determination and ability to take their students along and inspire them to greater things in life, definitely deserve commendation.

Vasanti Joshi and Pramila Bhalke were felicitated in a traditional manner by the Trustees Dr Nita Mawar and Malati Kelkar.

The 22 students and 3 teachers from SNDT College who participated in the girls cycle rally from Pune to Kanyakumari – a distance of 1600 km. – were felicitated by our Managing Committee Members Rajani Kulkarni, Sheela Lavakare, Shaila Limaye, Madhura Padhye and Anita Wagle.

On the way to Kanyakumari, the girls enacted street plays to spread the message of ‘SAVE GIRL CHILD’ and ‘PROTECT OUR ENVIRONMENT’.

The evening moved on with much grace in the guided presence of Ms Neeta Patwardan and the felicitation programme was followed by introduction of the doctoral candidate Ranjana Patil by our Scholarship Convener, Ms Meenal Kulkarni. The scholarship was awarded by our member Ms Rita Verma.

An interesting rendezvous with the IWD Women Achievers – Ms. Vasanti Joshi (along with student and teachers from SNDT) and Ms. Pramila Bhalke – was conducted by our Progress Eve Convener Ms. Pallavi Goswamy Berry wherein these inspiring ladies were primarily appreciated for gracing the occasion of the IWD at UWA, Pune and were interviewed on their achievements, aspirations, motivations and challenges during their journey in performing the inspiring acts of courage and being a source of unconditional change in the society.

After the interviews, Dr Nita Mawar spoke a few encouraging words about the Women Achievers and emphasised the importance of education and empowering women and their renewed roles in being a catalyst of change in developing India.

The evening was concluded by pledging an oath by Dr. Vinaybala Mehta, IFUWA President, keeping in mind the theme of education and empowerment of Women and a vote of thanks by Ms. Sheela Lavakare followed by a round fellowship programme.

“We, educated women, the privileged few, dedicate this day to the women leaders of yesterday, today and tomorrow.

We pledge to live and work in such manner that will enhance the dignity of “Education “. 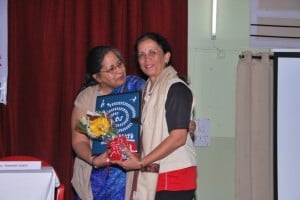 A small write up on our lady achievers:

Mrs Vasanti Joshi was felicitated for conducting the daring and one of its kind cycle rally expedition. On the 151st anniversary of the birth of Swami Vivekananda, on behalf SNDT Arts and Commerce College, Pune she organised and lead a cycle rally of 22 female students and 3 teachers from SNDT college from  Pune to KanyaKumari covering a distance of 1600 km. (22nd December to 12th January 2014). These students had never paddled on a gear bike and the preparations were completed in 10 to 15 days with guidance from Mrs Vasanti and their sports coach.

Vasanti has authored books, articles and research papers in the areas of Commerce and Management.

Participated in Pune and Mumbai Marathon and in cycling expeditions in the Leh – Ladakh region for three consecutive years and was the first lady to paddle successfully on the top of Khardung La (18350 ft high, the highest motor able road in the world).

Along with three other members recently completed Narmada Parikrama on cycle wherein they covered a total distance of 2725 km in 27 days of cycling.

Mrs. Pramila Bhalke was felicitated for being a source of change and building an erudite Tribal Maharashtra. Pramila Bhalke is the Principal for the past fifteen years of Sevadhaam Trust’s Ashram Shala, a residential school for the Tribal children in Maval Taluka, Pune District. This School is situated in hilly and Tribal area and it is 150 Km from Pune. The beneficiaries are the students from Tribal area of Maval, Khed, Junner, Ambegaon (District Pune) & Karjat Taluka (Raigad district)- in all 20 villages.

The main objective of this school is to instill liking for education in the tribal’s and reduce the gap between urban and tribal education by providing the population quality education and making available the various tools available in major cities of India.

She is thankful for the encouragement given to her by the Trustees Mr. Dr. S. V. Gore and Mr. Dr. K. B. Wadhokar, as well as primary school Head Master Mr.S.V.Bhor and Manager Mr.N.B.Thakar for their guidance and support to carry out her dream of unlocking her students true potentials by providing them with qualitative education for their all round development.

Following initiatives were undertaken by Pramila Bhalke in the school.

To develop the tribal students to be all rounders and be aware and good model citizens of India the main focus is by imparting knowledge through  friendship with counselling, inculcating the culture of reading, imparting of musical, oratory and dramatic skills to students, conducting meditation camps for developing their spiritual personality.

The school provides expert Career Guidance and mentoring to the students. I.Q. aptitude tests are conducted. It is the first tribal school to conduct the international intelligence testing (Mensa Test) and detecting 4 girls’ students as Mensans

Ms. Bhalke has produced & staged plays and street plays for Tribal Students and has taught the students classical music based on their interest and hobbies.

Under her tenure the Ashram school had been awarded with The Govt of Maharashtra’s Best Adivasi  Ashram Shala in Thane region and has won 1st prize in Inter Residential Adivasi Ashramshalas Sports competition in 2006 – 2007.

The school was the leading representative of Maharashtra State in Scout & Guide competitions at New Delhi and also won 2nd prize at all India level.

Pramila Bahlke is a recipient of Maharashtra Govt’s National Social Service award for best Student in the year 1995. She has won many prizes in sports, singing and debates and has won best playback singer prize from famous Marathi musician Shri Ram Kadam.

Pramila Bhalke is also active in the community work.

As a ‘Kirtankar’, she has conducted more than 250 programs of ‘pravachans’ based on the ‘ovis’ from Sant Dnyaneshwar Maharaj’s Dnyaneshwari.

She has started Self Help Groups – Imparting income generating skills to women, young girls and young married women from the nearby villages.

She has conducted talks on Personality Development and various other topics at schools, colleges and at the National Social Service camps for University Students.