Increasing Access to Education for Girls & Women in Asia: Solutions for Success

Access to education is not only a human right, it is essential to achieve economic growth, human development, peace and stability. Of the estimated 130 million young people who do not attend school, 70% are girls. This interactive seminar explored how the barriers to education can be overcome for girls and women in hard to reach places in Asia, with strategies that demonstrated solutions for success. 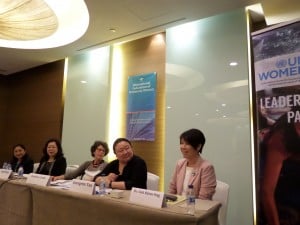 Ms Castle opened the seminar by highlighting that Asia and the Pacific is one of the most diverse regions; with a population of more than 3.7 billion people, it includes some of the wealthiest countries on earth as well as two-thirds of the world’s poor, a significant proportion of which are women. She outlined that: “Despite the fact that it has been proven that an educated woman elevates family, community and economies, girls and women are still not getting full access to secondary, tertiary and continuing education”. An indicator of success in gender equality, as stated by the Asian Development Bank, is reduced gender gaps in technical, vocational and tertiary education. MS Castle introduced the panel speakers, and passed over to Dr Theresa Devasahayam.

Dr Devasahayam gave an overview of the situation of girls’ and women’s access to education in Asia, highlighting that there had been positive developments in the region in closing the gender gap in primary school enrolment. However, Dr Devasahayam cautioned that progress was uneven. In South Asia, the gender gap in secondary school enrolment remains wide and will continue to increase, unless it is effectively addressed. Illiterate women lack empowerment Dr Devasahayam remarked, outlining that if all women completed primary school, child mortality would be reduced by 15%, and if all women completed secondary school child mortality would be cut in half. Dr Devasahayam highlighted that stark differences in access to education for girls in urban and rural areas in Asia:

“In such countries where there are sex segregated schools, there are simply no girls’ schools located at a reasonable distance from the homes of these girls and as such these girls do not have a chance to attend school”.

Dr Devasahayam told the story of Meena, a girl in South Delhi, India, who following harassment from a boy on her way to school, was withdrawn from school by her parents for fear of her reputation. Dr Devasahayam explained that this is a common story in the region, where gendered norms and the expectations of girls to undertake domestic duties at home, hampers their education. She emphasised the need to change mind sets and cultural norms if access to education is to be improved for girls and women and that the “impetus for change must come from policymakers”. This change would need to be supplemented with the provision of appropriate school facilities and female teachers, in all areas, including rural villages.

Georgette Tan brought two hats to the panel as an Executive Committee Member of the Singapore Committee for UN Women, and Group Head, Communications Asia/Pacific, Middle East & Africa, at Mastercard. Georgette shared her experience from a civil society and business perspective, outlining that the end goal must be remembered in access to education for girls and women; to prepare and equip them for work. Ms Tan highlighted that business skills are a vital part of education for girls, as well as entrepreneurship skills, to support women’s empowerment and economic independence. Ms Tan highlighted the success of the Singapore Committee for UN Women’s projects to facilitate entrepreneurship and empowerment among girls and women in the region. Ms Tan reflected on the need to create sustainability in educational development programmes through training trainers and equipping women to pass on their skills in their communities:

“It’s imperative that all girls have access to education but equally important is what the girls then do with this education. We must also ensure they have opportunities to participate in the workforce. It’s not just about giving a hand out; it’s about providing a hand up.”

Irene Boey highlighted the work of UWAS in Singapore and reflected on the barriers to education that girls and women in Asia experience and the need to tackle gender imbalances, while also offering opportunities at education for girls and women at all levels and stages of life. Ms Boey outlined the UWAS’ training programme for women prisoners in Singapore and the vital role of such programmes to provide women with a second chance at education and training:

The need to move away from gendered norms was also identified by Ms Boey as being of critical importance to address gender gaps in education, and particularly in the success of women in science, technology, engineering and maths (STEM).

Dr Soh Khim Ong rounded off the panellists’ opening remarks by sharing her success story as a mechanical engineer, giving insights into the barriers

she has faced along the way as a girl interested in engineering, to a student, and then prominent professional in the field. Gender stereotypes are prevalent throughout education and societies, Dr Ong explained, which deter girls and women from entering STEM fields. Dr Ong shared her experience from her time during her studies when she would be characterised as masculine by others, due to her chosen field. She emphasised the importance of female role models to encourage girls into STEM, as well as the role of teachers to promote participation in equal measures in both male and female students. Dr Ong reflected that more female teachers were needed at secondary and tertiary levels in STEM subjects, and stated that it was time for girls to “sit at the front table” in these subjects. She identified the necessity to remove barriers for girls and women to access education, and to progress in STEM subjects. This process relied on changes in cultural and gender norms for girls as well as educational policies which support gender balance for girls and boys in education, in all subject areas.

An interesting discussion followed when Ms Castle opened the floor for questions. A number of issues from grassroots to policy levels were raised by the audience. These included, the expectations of women in the home and its effects on women’s careers, the role of business policies in improving access to education for girls and women and supporting women’s careers in STEM, the importance of the parents in supporting girls’ education and choice, and the role of women in giving back to society through projects and programmes that empower girls and women through education and training. Ms Castle thanked the panel speakers and the audience for their insightful contributions to the seminar. Ms Castle rounded up the discussion with reflections on the solutions that had been put forward to improve girls and women’s education which included a move away from gendered and cultural norms that disadvantage girls and women, and a need for policies and infrastructures at national and local levels that ensure girls’ and women’s education. Ms Castle highlighted that women mentoring other women needs to be more prevalent, because while women climb the ladder they can forget to leave the ladder behind them for the next generation of women. 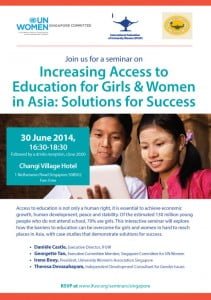