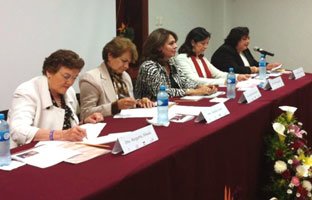 Last December, the Mexican Federation of University Women (FEMU) held a national colloquium “Breaking the Glass Ceiling”, at the Autonomous University of Campeche. This event was co-organized by the Women’s Institute of Campeche and was held as part of IFUW’s International Colloquia Project.

Dr. Patricia Galeana, founding President of FEMU and GWI Vice President, gave the keynote speech, in which she reviewed FEMU and IFUW’s history and highlighted the importance of being part of both organizations, the latter being an important vehicle to ensure respect for women’s human rights.

During the two days of the colloquium, participants discussed the themes of Empowerment through Education, Self-Financing for Economic Independence, and Women in Science. They were also able to watch the presentations of a number of experts from various Mexican States.

Based on the conclusions drawn from these discussions and presentations, a number of proposals were formulated to reform national legislation and/or ensure its application.