2015 marked an exciting new chapter for the International Federation of University Women (IFUW) when it relaunched under the new title of Graduate Women International (GWI). 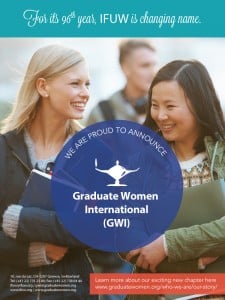 The new title more accurately reflects the dynamism and inclusiveness of the organisation, which is active in advocacy, projects, fellowships and grants. New national affiliates from all over the world continue to join the ranks of GWI. With its global mission and the commitment of tens of thousands of members, GWI aims to become the household name synonymous internationally with girls’ and women’s education.

Why did IFUW decide to change its name to GWI?

The name Graduate Women International better describes the more inclusive nature of our membership, which is open to all women who have attained a degree, diploma or equivalent qualification from an institution of higher education. GWI represents the next, dynamic chapter in the venerable history of IFUW.

When did the name change take effect?

GWI was adopted by the organisation’s General Assembly in March 2015 and was publically launched on 27 April 2015.

Has the mission of the organisation changed since the rebranding?

Not at all.  In fact GWI is more commited than ever to championing the organisation’s founding mission of promoting access to quality, lifelong education and training up to the highest levels for all girls and women worldwide.

Does GWI have profiles on social media?

Back to Our Story