British Federation: Colloquium on Glass Ceiling in HE

British Federation: Colloquium on Glass Ceiling in HE 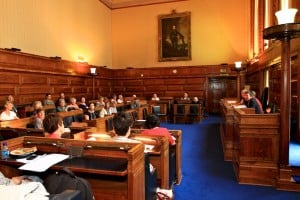 A national colloquium organized by the British Federation of Women Graduates on 11 May 2011 brought together twenty leading women academics, most at the Vice-Chancellor’s level, to discuss with BFWG members the question of Female Leadership in Higher Education: Overcoming the Barriers – real or imagined?. Speakers noted that while 50% of the graduates from higher education are now women, less than 18% of the senior academic posts are filled by women. Across Europe, 45% of PhDs are done by women, yet 20% of male academics are top-grade professors while the corresponding rate for women is only 7%. Throughout the day, participants addressed the institutional and practical barriers that need to be changed if parity in higher education is to be reached and shared best practice examples that are making a difference in some universities.

Professor Teresa Rees, until recently Pro Vice Chancellor at Cardiff University, shared policies that were proving effective at her university, including clear benchmarking and transparency when it came to promotion and requiring letters of reference to comment on these. The University was also taking a harsh stand on sexual harassment and bullying. Professor Elaine Thomas, Vice Chancellor of the School for Creative Arts, Surrey spoke of the importance of networking and role modelling. Sarah Hawkes, Senior Policy Adviser at the Equality Challenge Unit, spoke about the Athena SWAN Charter, which recognises and celebrates good employment practice for women working in science, engineering and technology (SET) in higher education and research.

The Colloquium showed a clear need for greater networking among women academics to work together on common strategies. BFWG has made this one of its priorities for its ongoing programme. The Colloquium is also serving as a model for an international project on Breaking Down Barriers to Female Leadership in Higher Education, which IFUW will launch in September 2011.

Back to Great Britain