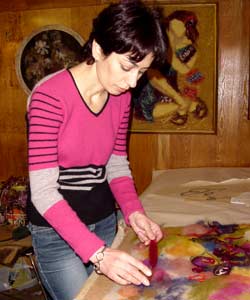 Despite the fact that Georgia has ratified and recognized women’s rights conventions, there is no provision for disabled and marginalized women.

Based in the Oni region (north west of the capital, Tbilisi) the aim of this project was to integrate marginalised women into society through the revival of the national craft of felt production.  The project began in 2007 and the Georgian Association of University Women worked with the local council of Oni, the Georgian Ministry of Culture and Science and the “Georgian Felt” company.

The project taught creative skills to women with physical disabilities, refugee women and unemployed women, enabling them to produce handicrafts, earn an income from this work and keep the traditional Georgian handicraft “alive”. Each training group comprised 30 women who received three months training in photo art and traditional felt production from professional artists. The Georgia Association’s partner in this project, the Disabled Women International Organisation (GDWIA) provided the training rooms and exhibition space. Two exhibitions of mixed felt works were held in 2007 with the support of local authorities. Trainees produced a photographic catalogue of their work.

The Russia-Georgia conflict in August 2008 temporarily halted the project as Oni was one of the areas under attack.