Promoting and Protecting Education in Situations of Armed Conflict – HRC25 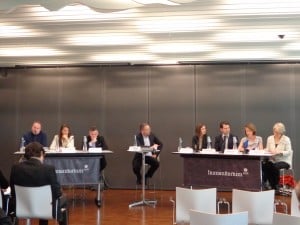 The International Committee of the Red Cross (ICRC) sponsored a side session at the Human Rights Council called “Promoting and Protecting Education in Situations of Armed Conflict” on March 14th, 2014 at the ICRC Humanitarium.

The event discussed the impact of armed conflict on children’s education, the humanitarian and legal aspects of the issue and possible solutions. Bede Sheppard, Deputy Director in the Children’s Rights Division of Human Rights Watch, said that military forces use schools as military shelter or as training centres. This is a security concern because schools become the target of attacks for military forces and are often burned or bombed. Using schools as battlegrounds leads to a fear for children to attend, parents to send and teachers to teach, said Ellen van Kalmthouth, Education Cluster Coordinator at UNICEF.

Half of children out of school live in armed conflict zones and it is important to focus on education because it can impact and help prevent future international crimes, such as genocides and torture. Schools should provide a safe environment for children, allowing them to have a normal childhood and provide hope for a better future. This is the same mission of GWI, which advocates for women’s rights through access to quality education.

Kalmthouth stressed the need for community engagement when searching to find solutions. NGOs can collaborate with families to educate them on safe behaviour and risk reduction activities. There also needs to be better partnerships between different actors, such as the UN and other international institutions, to have better reporting on incidents and better data. GWI agrees with utilising global mechanisms because it also promotes international cooperation to solve issues with wide ranging effects.

The role of International Humanitarian Law (IHL) in dealing with armed conflict and education was discussed by the legal experts on the panel. Dr Gloria Gaggioli, legal adviser at the ICRC, explained that although better implementation and interpretation of IHL is necessary, it should not be undermined because it provides a base to start brainstorming solutions. Dr Stuart Casey-Maslen, Head of Research at the Geneva Academy of International Humanitarian Law and Human Rights, offered a different view by expressing that the law is too permissive towards indiscriminate attacks and there is no specificity on the use of force.

Armed forces can also aid in providing solutions to make sure schools are not used by the military. They can take precautions to protect belligerents and guarantee that all parties involved are abiding by the same rules. Geoffrey S. Corn, Professor of Law at the South Texas College of Law, suggested that more information on guidelines should be given to military personnel so that they can plan before deploying forces to an area.